5 Mistakes I Made When I Started Genius Hour

So often, those of us that share Genius Hour, talk about how amazing it is and what we did well.  However, the reality is that most of us did a lot of things wrong, too.  It's important to not only talk about what went well, but also what went wrong.  I know that I made several mistakes along the way and my hope is that sharing those mistakes might help someone else in their journey.  So, here it goes...five mistakes that I made as I began to implement Genius Hour and what I would do differently today.

1.  I didn't value productive struggle.
What I Did: As I began to implement Genius Hour, I wanted my learners to be all in.  I also wanted their parents to be all in.  I quickly realized that they were going to struggle while working on their projects and I wasn't always going to be able to help.  In the beginning, I did all I could to prevent struggle and tried my best to have as many answers as I possibly could.  That was a terrible idea.  The reality is that it was only through allowing my learners to struggle that they were going to gain the skills and perseverance they would need beyond the walls of the classroom.  I had to learn that I didn't need to have all of the answers and had to restrain from trying to "save the day".  Instead, I needed to support them in their struggle and give them opportunities to independently work toward the solutions for the problems that they encountered.  As I began to realize the important role that productive struggle played in the Genius Hour process, I became more comfortable with my new role.

What I Would Do Now: Today, I would help both my learners and their parents understand the importance of productive struggle and make it a priority from the start.  I would understand that my role as a teacher was not any less important because I wasn't providing answers.  Instead, it was different and I would have an even greater impact on who my learners would become beyond the walls of the classroom.

2.  I wasn't flexible with my timeline.
What I Did: When we first started Genius Hour, I explained to my learners that they would complete one project each semester.  In doing so, I was dictating how long their projects should take.  This was a mistake as it limited many of my learners in so many ways.  Some of them needed more time while others could have completed 2 or 3 projects in that amount of time.  By dictating what the timeline would be, I was not allowing my learners to make an important decision, practice time-management, and have full ownership of their project.

What I Would Do Today: Now, when I explain Genius Hour and how important purposeful planning is, I explain that it's important to let learners decide how long they think the project will take.  You might even provide options (3 weeks, 3 days or 3 months).  The goal is to encourage full ownership of the project and give them an opportunity to make decisions that will result in a willingness to invest.  If the project isn't completed by the date that they thought it would be, it's not a huge problem.  The date is just a target that we are trying to get as close to as possible.

3.  I expected immediate buy-in.
What I Did: When I first learned about Genius Hour, I knew it was what my classroom had been missing.  I was so excited and expected my learners to react with the same excitement and buy-in that I had.  However, I didn't account for the fact that I was changing everything for them.  I was taking what was comfortable, familiar, and honestly, easy and replacing it with something that was uncomfortable, different, and more open-ended than anything they had experienced before.  As a result, they had questions, their parents had questions, and the excitement that I expected didn't happen right away.

What I Would Do Today: Instead of assuming that they would buy-in, I would make more of an effort to have honest conversations BEFORE implementing Genius Hour.  In looking back, helping both my learners and parents understand WHY Genius Hour was going to be a priority would have been a good idea.  Today, I would definitely schedule intentional conversations that would allow everyone involved to ask questions and provide feedback before full implementation.

4. I made assumptions based on my own perspectives.
What I Did: Often times, I made assumptions based on what I thought my learners might be thinking or feeling.  I assumed they were good if they weren't asking questions and that they understand the process.  However, looking back, I realize that often times, they needed me to ask them questions.  Sometimes, my learners didn't know what they didn't know.  Providing feedback and asking for feedback is a so important and should be a priority throughout the entire process of Genius Hour.

What I Would Do Today: Feedback would be my number one priority.  I would consistently ask my learners how it was going and check in with student conferencing and documentation of learning. After realizing the importance of documentation of learning and feedback, I created these slides.  Feel free to use them in any way that you'd like.  I also think that consistently asking for feedback through student conferencing or even Google Forms is a good idea.  Maybe ask the following questions...

5. I didn't provide a road map.
What I Did: When we first started Genius Hour, it was a mess!  I'm convinced that it was as messy as it was because we didn't have a road map.  Don't get me wrong, with or without a road map, it's going to be a little messy.  However, I was spending all of my time managing projects and I didn't have the time to actually connect with and create relationships with my learners the way that I had hoped.  Without a roadmap, my learners were never exactly sure what I expected or what they needed to accomplish along the way.

What I Would Do Today:  Upon realizing what a huge problem this was going to be, I created the 6 Ps of Genius Hour - Passion, Plan, Pitch, Project, Product, and Presentation.  After implementing this process, my learners began to understand what they were expected to accomplish while still being given the freedom to do it in a way that made sense for them.  Having a road map for Genius Hour changed everything for us and I would make this a priority today.  I began to spend my time weaving in connections to the standards, life-ready skills, and I was able to build the relationships with my learners that I knew were so important during this time.  The 6 Ps of Genius Hour made Genius Hour manageable for me and meaningful for my learners.

(If you'd like to learn more about the process, you can read the original blog post here or even enroll in my online course that will teach you EVERYTHING you need to know about the process and Genius Hour before getting started.

BONUS MISTAKE 😊 - Our projects weren't driven by PURPOSE.
​
When I first began Genius Hour, our projects were just projects connected to what my learners liked to do or what they wanted to learn.  Along the way, I realized that their passion projects needed to be driven by purpose.  In other words, they needed to have a why behind the work that they were doing.

Genius Hour can be about so much more than a product and presentation.  Ask your learners what change they'd like to create or what impact they'd like to have on the world around them.  You might also encourage them to write purpose statements for their projects like, "I want to learn about ____________________, so that I can _______________________."  That sentence helps them realize that they aren't just doing this because it's part of their day, but that there is purpose behind the work.  This makes a HUGE difference and reminds our learners that they can use what they do in the classroom to influence what happens outside of the classroom.

Well, there they are...five mistakes (and a bonus) that I made when I first implemented Genius Hour.  I was blessed to be able to realize most of these mistakes early on and make the changes that would be most beneficial for my learners.  Remember, Genius Hour is messy.  It won't be easy but it will be worth it.  You will make mistakes, but just like I did, you will learn from those mistakes and be better for them.

I hope reading about my mistakes is helpful and gives you the confidence you need to dive in and make Genius Hour a priority in your classroom.   Passion-based learning is an opportunity for learners to make connections, practice life-ready-skills, and make an impact on the world around them.  It only makes sense that we make this type of learning part of the process.

I'd love to hear about any mistakes that you've learned if you have implemented something like Genius Hour in your classroom.  Feel free to share in the comments below. 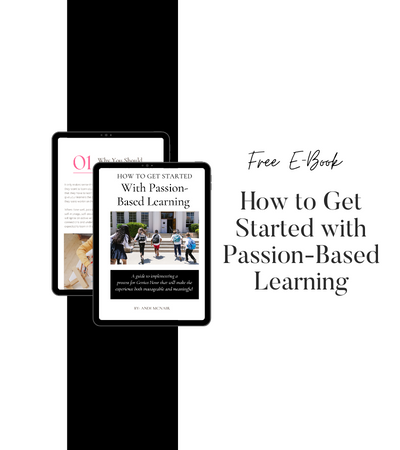 Join my email list today and get your FREE copy of the How to Get Started with Passion-Based Learning E-book.  If you've been wanting to implement Genius Hour, this is a great place to start!